My week with the eight inch Galaxy Tab 3

For the last week I have traded my already large Samsung Note 2 for a gigantic phone, not a phone really but an eight inch Samsung Tab 3. Thanks to my friends at the NZTechPodcast and Samsung I’ve had a week to get to know the Tab 3 and compare it to the other mobile devices I’ve used. Since I only had a week I needed a way to force myself to use the Tab 3 all the time, the simplest thing was to put the Vodafone SIM out of my Note 2 into the Tab 3 and make it my phone. My Galaxy Note 2 is a big phone, as people tell me when they first see me use it, but the Tab 3 is twice as large. I don’t suggest using the Tab 3 as a phone, but it can fill the role when paired with a bluetooth headset that you keep handy at all times. I have been using the Tab 3 with 16 GB storage and the LTE 4G wireless network that is being rolled out by the cellular companies at present.  I’m going to write about my use, if you’d like a more speeds and feeds review try the Engadget review or one from The Verge 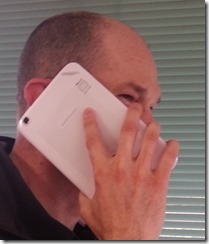 My that’s a big phone on my face, glad I didn’t answer calls like this in public.

As a standard tablet device the 8 inch size works well for me, just small enough to fit in the back pocket of my jeans or the inside pocket in a jacket. I could imagine carrying it with me most places I go, with LTE built in I don’t lose connectivity when I leave home or the office, in fact its faster on 4G than anywhere else I have tried. In downtown Auckland SpeedTest.net reported between 20 and 40Mbps download on the Vodafone 4G network, faster than my ADSL service at home. In central Tauranga, where 3G is the best you get right now, the throughput was around 6Mbps. Both good enough for streaming video which is about the only thing that I’d do on a tablet and needs a fast connection. Of course tethering my laptop with the Tab 3 would be a great way to use the speed. On the 4G network YouTube videos didn’t suffer any lag or stuttering, the same cannot be said for my home Internet connection.

General usability of the Tab 3 is good, sometimes application switching is laggy, that isn’t unusual for a mobile device with a dual core CPU. Games played well and video looked as good as it can look on a TFT screen, I’ve been spoilt with the Note’s AMOLED. I kept up with my email, twitter and blogs with ease, web pages really benefit from the extra screen size. Despite having the same resolution as my Note 2 at 800 x 1280 the Tab 3 is an easier device to read on.  I spent quite a while reading Game of Thrones using the Kindle app, something I don’t do with my Note, then I watched an episode of the TV show and again the extra screen size made a big difference. As a content consumption device the 7 or 8 inch size us ideal, a spacious screen without being too heavy to hold for a long period of time.

Here’s the glamour shot of the display, it’s a good screen.

Samsung have a plethora of Android tablets, the Note series feature a stylus while the Tab series are lower cost without the stylus. Having had the Note 2 for nearly a year I can say that the stylus isn’t essential for me but I like a large screen. One thing I would like is broader accessory support. Covers, cases, stands docks and keyboards are useful things to have on a mobile device. I particularly want a wired keyboard to allow me to use my tablet as a productivity device even when I’m on a plane, where a Bluetooth keyboard is still forbidden.

One feature I’m glad to see coming back into mobile devices is Infra-Red (IR), in the dim distant past I even had an IR keyboard which I could use on a plane. Unfortunately the keyboard is long gone and used a similarly abandoned standard called IR-DA. The IR on the Tab 3 is consumer IR, which means that the tablet can be used as a universal remote control. I tried this out at my in-laws house, where I was able to use the tab to turn on their TV and could probably have controlled more of their devices too.  I like this as an integration between the TV and the “second screen” that I usually have next to me when I’m watching TV. The ability to have a program guide on my tablet and then change the TV channel would be great, shame it doesn’t seem to be there yet.

As always a new gadget is compared with previous gadgets. I currently have an original Nexus 7 and an iPad mini, yes I know that’s a lot of toys but I’m sure I can make up a plausible excuse. The Tab 3 is larger than both devices, but much thinner and lighter than the Nexus 7. The critical size test for this as a consumption device is whether you can hold it up in one hand for the duration of a movie, for me the Nexus 7 is a no and the Tab 3 is a yes. The iPad is a less convenient device as getting content onto it isn’t so easy. I have a USB OTG cable for my Android devices, so any media I can put on a USB drive is accessible on Android. The iPad USB connector only allows you to import photos, not play them directly.

I’ve had a great week with the Tab 3, my workmates have been entertained by me using it and liked having a little play too.  I will be pleased to go back to the smaller phone, but think I’d like to have a 4G connected device with a large screen as well.